Please share this page among all your friend who are seeking Info and latest news regarding JNTUH B.Tech 1st Year Results for r15 and other regulation. Also put a link of this post on all of your social media pages as well. If you have any doubt or confusion regarding this, leave a comment below and we will surely get back to you as soon as possible. You may head back any time to check latest valuation info and expected release dates of JNTUH 1st Year Results of Supply Examinations of R15, R13 regulations.
We are happy to introdcued our new SMS based updates system. Simply opt in for SMS based JNTUH Updates and you will get all updates, notifications, time tables and all other useful information right in the inbox. This service is totally free and to opt in, simply fill the form at your right hand side and enter correct details and you will be getting sms for all upcoming JNTUH updates, whenever there is any new notification officially announced by JNTUH.
Here You May Get:
Read More

JNTUH Dasara Holidays 2016 – Below we have provided detailed Holiday Information related to Dussehra 2016 under JNTU Hyderabad. So scroll down and check vacation details for B.Tech, B.Pharmacy, M.Tech, M.Pharmacy, MBA, MCA and other courses offered by JNTU Hyderabad University. These details have been provided based on the details provided in various Academic Calendars released by JNTU Hyderabad.
B.Tech / B.Pharmacy: 05/10/2016 to 12/10/2016
MBA / MCA: 08/10/2016 to 12/10/2016
M.Tech / M.Pharmacy: 08/10/2016 to 12/10/2016
Pharma.D: 05/10/2016 to 12/10/2016
So above are the latest update regarding the Dussehra Holidays for JNTU Hyderabad and we will provide the holidays details for JNTU Kakinada & JNTU Anantapur very soon, stay tuned to get that information as well. We have provided these details and holidays information based on the data provided in JNTU Hyderabad Academic Calendar and there has not been any further Official Notification specifically for JNTUH Dasara Holidays 2016 details. After the Holidays of various courses the Colleges and university is scheduled to reopen on 12 October 2016.
We Would Also Like to tell You that this Info is not Official and this is regarded as per the JNTUH, JNTUK & JNTUA Academic Calendars. However, if We get any official Update Regarding the Holidays from the university, same will be intimidated. Leave a Comment Below if you have any query regarding the Dasara Holidays or regarding any Content on Our Website.
Share this Info among Your Friends and On Your Social Media Pages. If you want the latest updates in your inbox, You can Subscribe to our Newsletter as well. Feel Free to Contact us regarding anything related to JNTU Hyderabad & Its Sister Universities.

Here You May Get: 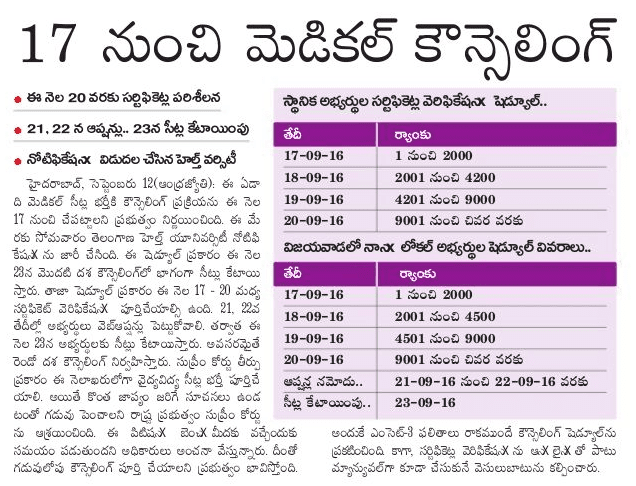 Admin 9/15/2016 11:59:00 AM
TS EAMCET 3 Results 2016 : The Telangana State EAMCET III Medical examination was successfully conducted by Jawaharlal Nehru Technological University Hyderabad (JNTUH) on september 11, 2016. The exam was applied and attended by a large number of candidates.

This year, the university conducted the examination on behalf of Telangana State Council for Higher Education (TSCHE) on september 11, 2016. The entrance test was conducted for admission to various MBBS and BDS courses offered for the academic year 2016-17.

Criteria for Ranking: The candidates who have secured qualifying marks in TS EAMCET-III-2016 and candidates belonging to the category of Scheduled Caste and Schedule Tribe, for whom qualifying marks have not been prescribed, shall be assigned ranking in the order of merit on the basis of combined score obtained by giving 75% weightage to the marks secured in TS EAMCET-III-2016 and 25% weightage to the marks secured in the relevant group subjects namely Biology, Physics, Chemistry of the qualifying examination.

Previously, the officers have conducted the TS EAMCET 2 test and released the results. But the leakage issue, the exam was cancelled. So, the officials have issued the TS EAMCET 3 notification and decided to re-conduct the exam. More than fifty thousand members have enrolled their names and download the admit card to attend the exam. After successful getting the hall ticket, everybody has participated the exam on 11th September 2016. Now, everybody is looking for the TS EAMCET 3 Results 2016.
Steps to Download TS EAMCET III Medical Exam Results 2016
About TS EAMCET III 2016 :


Medical Common Entrance Test (TS EAMCET) is conducted by Jawaharlal Nehru Technological University Hyderabad on behalf of TSCHE. This examination is the prerequisite for admission into various professional courses offered in University/ Private Colleges in the state of Telangana.

JNTUH MBA Exams Scheduled on 15/09/2016 are Postponed & Rescheduled to be commenced of 17/09/2016.
It is here by informed that the M.B.A course Examination to be held on 15-09-2016 is postponed due to holiday declared by Government of Telangana on account of Ganesh Immersion and rescheduled as mentioned below.

The answer scripts of the examination on 17-09-2016 shall be sent through speed post to the concerned Additional Controller of Exams, Exam Branch, JNTUH, Kukatpally, Hyderabad-500085 on the same day of examination.
Please forward this information to all concerning students.

JNTUH 1st Year, 2-2, 3-2 Sem Advance Supply Exam Time Tables, Oct 2016- Released. JNTU Hyderabad announced JNTUH B.Tech/ B.Pharmacy 1st Yr, 2-2, 3-2 Advance Supply Exam Time Tables, October 2016. These Examinations are supposed to be commenced in the month of Oct 2016. Recently, the university has released JNTUH Examination Notification, and now the University has released JNTUH External Exam Time Table for B.Tech & B.Pharmacy. So all concerning students who are studying in any of the affiliated college are hereby informed to check JNTUH B.Tech/ B.Pharm 1st Yr, 2-2, 3-2 Exam Time Tables, Oct 2016. Scroll down and check detailed time table for each Year & Semester for which the external examinations are scheduled in the month of Oct 2016 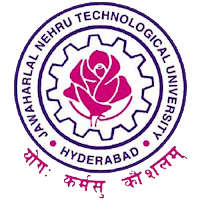 JNTUH Examination Scheduled on 13/09/2016 are Postponed and Rescheduled

JNTUH Examination Scheduled on 13/09/2016 are Postponed and Rescheduled

JNTU Hyderabad released a notification that JNTUH Examination Scheduled on 13/09/2016 are Postponed and Rescheduled and RESCHEDULED DATES are provided.
“In partial modification of the orders issued in G.O.Rt.No.3192, G.A.(Poll.A) Dept., dt.05.12.2015, notifying the General Holidays and Optional Holidays, the Government hereby declare  13.09.2016 (Tuesday) as General Holiday on the occasion of ‘Bakrid Eid Festival (Eid‐ul‐Azha),  instead of    12.09.2016 (Monday), declared earlier.”
So all examinations scheduled on 13/09/2016 have been postponed and the revised time tables have been provided below.
It is here by informed that the M.B.A/M.C.A/B.TECH/B.PHARM courses Examinations to be held on 13-09-2016 are postponed due to change of the date of Bakrid Festival and rescheduled as mentioned below.
Download Official Notification
Notification – II- Detailed Revised Time Tables
So that’s the Info, JNTU Hyderabad has postponed and all the university examination which were scheduled to be commenced on 13/09/2016 and also the University has provided the revised Dates for all postponed examinations.
Share this info among all your friends and also on your social media pages. Fee free to get in touch with us if you are having any query or confusion in this regard.
Following Examinations are Postponed:
Read More
Newer Posts Older Posts Home
Subscribe to: Posts (Atom)